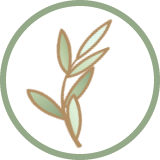 Native to the Mediterranean, this shrubby bush reaches three to four feet high with light blue or pink flowers. Its name comes from Latin Rosmarinus, meaning "sea dew" because it prefers access to ample water. Ancient cultures considered rosemary to be a sacred herb with many powers. During the Middle Ages it was used to ward off the plague, in France it was burned in the hospitals during epidemics. Traditionally, rosemary is often considered the "herb of remembrance" and brides carried it in their wedding bouquet for centuries.

You can use Rosemary Oil to freshen your room by adding it to potpourri or a terra cotta perfume ring. It will energize you and lift your spirits! A common ingredient in expensive salon products, rosemary blends well with grapeseed oil.